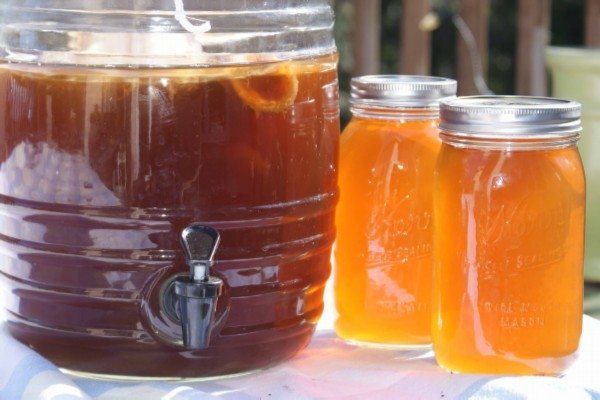 Kombucha is made from sweetened tea (usually black tea, but sometime green tea as well) fermented by a Symbiotic Colony Of Bacteria and Yeast (SCOBY). The result is a restorative elixir that has cancer fighting properties, and improves arthritis and other degenerative diseases. It is rich in vitamins and other nutrients such as Vitamin B, Glutamic acids, and antioxidants along with many therapeutic benefits.

As with most places, during the 19th century Russia noticed a remarkable increase in cancer rates. Soviet researchers looked at cancer rates by region and noticed that in certain geographical areas some populations were practically immune to cancer while in other areas the people seemed to be suffering from a cancer epidemic. As they looked closer at those areas, they noticed a correlation between high levels of Kombucha intake and lower cancer rates. Russia and Germany conducted many studies on the health benefits and potential cancer fighting properties of Kombucha during the 1800s. Unfortunately, most of that data was lost during the cold war and political transitions.

During these political transitions the West was becoming more aware of Kombucha. However, only recent have more of us heard of this powerful antioxidant. Unfortunately, as is typical in our culture, there are no studies into the health benefits of Kombucha because there is no profit to be made by corporations or big pharma…after all, it only costs about fifty cents per gallon to make at home.

What are the top reasons to drink Kombucha daily?

Detoxification: Probably the number one benefit of Kombucha is its ability to help the body produce many enzymes and beneficial bacterial acids it uses to aid the liver and kidneys in detoxifying your body. Glucaric acid has been shown in clinical studies to aid cancer patients such as Ronald Reagan who started drinking Kombucha regularly after his cancer diagnosis in 1987, he didn’t die until 2004 of old age.

Digestive and Gut health: Close behind detoxification is its ability to help the body maintain digestive health. Because it is fermented by a colony of probiotics (beneficial bacteria), Kombucha improves digestion and absorption of nutrients in your gut. Next time you feel like your body is not processing food correctly or suffer from digestive uncomfortableness, try Kombucha.

Increased Energy: Kombucha aids the body by forming iron during the fermenting process. It also contains a small amount of caffeine and B-Vitamins that energize the body. As the tea is fermented, iron is chelated from the tea, boosting blood hemoglobin, increasing oxygen supply to the cells and stimulates energy production at the cell level.

Immune Boost: Kombucha is a very strong natural antioxidant and helps manage free radicals. Scientific studies show that it contains DSL (D-saccharic acid-1, 4-lactone) that decreases oxidative stress and related immuno-suppression. It is believed that DSL and Vitamin C that the Kombucha contains help protect against cell damage, inflammation, tumors, and depression of the immune system. It also contains probiotics that support the absorption of nutrients and support the immune system.

Weight Loss: Kombucha improves metabolism and limits fat accumulation according to one study in 2005. Although more studies are needed to confirm this data, it contains polyphenols and high acetic acid (like Apple Cider Vinegar) that help with weight loss.

Kombucha, once impossible to find in the US, today is available at most grocery stores (especially natural health stores such as Trader Joe’s and Wholefoods) but watch the sugar content, many of them contain high amounts of sugar, so check the label and keep the sugar under 9grams. You can also get a SCOBY (the starter culture that begins the fermentation process) and make your own. It takes a little time each week, but it is inexpensive and a great way to ensure the best Kombucha.

How to Make Kombucha

1 gallon glass tea jar (with the spigot on the bottom)

1 cup of Kombucha “liquor” (liquor is the fermented Kombucha)

1 gallon of water (filtered or distilled)

Boil water on the stove. Remove from heat and add sugar, stir until dissolved.

Add teabags and let steep for about 15 minutes.

Remove the teabags and let the mixture cool to room temperature.

Put the tea into the tea jar and add the SCOBY and “liquor”.  The SCOBY will float on the top.

Cover loosely with the lid (do not tighten as the brew creates air while fermenting that needs to escape) and let it stand for about a week in an area that stays about 75 degrees.